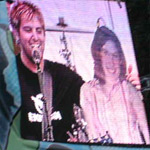 Ok, so I did it again. I out-somethinged myself. I have a knack for doing excactly those sort of things that people joke about but never would have done in real life. Lindsay was talking to her cousin and friend Natalie on the phone and they were talking about how Natalie would miss Cornerstone. Jokingly, Lindsay said that someone should make a cardboard cutout of her and take her out to Cornerstone. Tuesday of this week, I got a phone call from Lindsay when she was on her way into Bushnell. She told me the whole story - and of course, I left for Wal-Mart right after that. I stayed up that night until 3 a.m. putting the finishing touches on her. Through the whole week we've been taking random pictures of her in all sorts of situations – from worship on the beach to wearing a festival t-shirt to Sunday.... On Sunday, the plan all along was to let her crowd surf - no matter what this meant for her frail body. So up she went in the middle of the Jeremy Camp concert. She made her way back and forth, and spent a good five minutes making her way around. She made a couple appearances on the video screen, so I was just ecstatic. Then the song ended. Jeremy Camp just kinda looks at the crowd and said something along the lines of "What was that?" So Keith took her on toward the stage and she got passed up to the stage. He did a little dance with her and a litte Q&A with the crowd over what she was doing here. Here, just take a look at the video clip if you have Windows Media Player.

Natalie didn't just spend her time at main stage - find out more about her adventures in this Photo Album: http://photos.yahoo.com/new2cornerstone

CHAD YOU ARE THE COOLEST EVER! Oh my gosh. When my mom sent me an email (which I hear foiled your plan) I went beserk in the computer lab and told all my friends who were excited because I was going crazy but just didn't understand. Hahahaha! Do you have more of my meeting Jeremy Camp on video? I'm just curious as to how we danced and how I was introduced...aw man. Thanks so much man. You're totally the wizard. The wiz. This made my year...and yet made my heart heavy that I missed it. Thanks for being so overly whatever. You're a blessing!

That is the perfect way to describe you, Chad! So overly whatever! I love it!!!